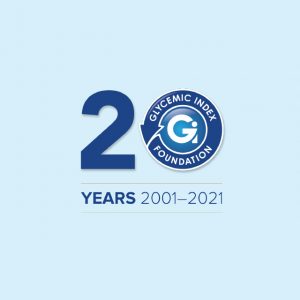 The Glycemic Index, or GI, was first discovered in Canada in 1981 following many decades of research around the world into the causes of diabetes.

The discovery of GI helped put an end to the myth that sugars and sugary foods are inherently worse for blood glucose levels than starches and starchy foods and provided a more useful guide to healthy eating for people living with diabetes.

Fast forward to 1996 when the first comprehensive evidence-based resource on the glycemic index for consumers – called The GI Factor authored by Professor Jennie Brand-Miller – was published in Australia and went on to become an international best seller.

In the late 1990’s, to help consumers use the GI while shopping, the University of Sydney, Diabetes Australia and the Juvenile Diabetes Research Foundation (JDRF) joined forces to develop a new, easily identifiable and trusted logo to indicate that a food has had its GI reliably measured and has its GI value is listed on the pack.

The GI Foundation was established in 2001, giving birth to today’s GI Symbol Program which was officially launched in July 2002.

Now, foods that are eligible to use the GI Logo must have their GI measured at an approved GI testing facility, according to the International Standard ISO 26642:2010.

Consistent with Australian Government and international dietary guidelines, they must:

Adhering to a low GI diet can bring about a 0.5% decrease in HbA1c levels which is equivalent to the effect many diabetes medications and insulin can achieve. This will help reduce the risk of common diabetic complications by 10%-20%.

In 2021 more than 300 foods and products carry the official low GI Symbol helping people living with diabetes, and those at risk, choose healthy low GI foods for all of their main meals, snacks and desserts.

The GI Foundation is also recognised internationally as a world leader in translating the science of glycemic index into practice for the benefit of consumers.

And 100 years since the discovery of insulin…

This year also marks the 100-year anniversary of the discovery of insulin in 1921.

Before insulin was discovered, there wasn’t much doctors could do to help people diagnosed with diabetes, so insulin’s discovery was a life-saving breakthrough.

In 1921 researchers discovered the pancreas was the site where insulin is produced and, without a pancreas, a patient would soon develop diabetes and die.

This led to the first insulin injection, in a 14-year-old boy dying from diabetes in Canada, which saved his life. The news about insulin quickly spread around the world and, in 1923, Frederick Banting and John Macleod received the Nobel Prize in Medicine for their research into insulin. Large-scale production of insulin commenced soon after.

Insulin now comes in many forms, from regular human insulin to ultra-rapid and ultra-long-acting insulins, and there are 12,000 Australians with type 1 diabetes now relying on insulin to survive.

While scientists and researchers are working hard to find a cure for diabetes, there is no doubt insulin has been, and will continue to be, a medical marvel and life saver for people living with diabetes.

For more on the amazing history of insulin, visit Diabetes NSW & ACT.

A free selection of downloadable low GI resources to help your patients' health and wellbeing.Diabetes Resources...

With the onset of the entertaining season comes invitations to countless parties, and for those wanting to maintain...

Low GI carbs vs whole grain vs white – what are the best carbs for our health?

Carbs have copped a bad reputation and are often first on the dietary chopping block for those looking to lose weight....